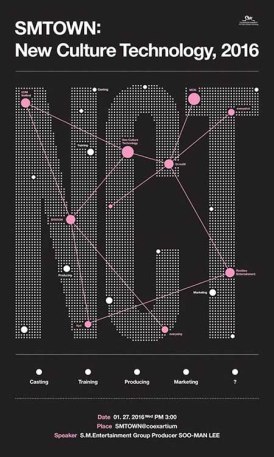 On January, 27th, 2016, SM Entertainment released a video conference about « The Future of Culture Technology« .

This video conference got me concerned about the future of K-pop but at the same time amazed by SM Entertainment’s vision for the future. Through this speech, Soo Man Lee, founder of SM Entertainment established the label as the one and only pioneer of the « Hallyu » (Korean Wave), the leader of K-pop music industry, the trend setter. I have truly experienced SM Entertainment know-how and power and by the end I became scared by its impressive yet scary and ambitious project.

The conference opened with an impressive chronology of SM Entertainment history and achievements.

2 / THE FUTURE OF CULTURE TECHNOLOGY

It’s an understatement to say that SM Entertainment has unique Culture Technology (CT). Which enabled the company to produce and spread its contents and Hallyu not only on the domestic market but also to Asia and worldwide.

Culture Technology is composed of 4 main stages : Casting, Training, Producing and Marketing (also known as Management). These represent the 4 core culture technology stages that SM Entertainment has developed for 20 years.

SM Entertainment aims to constantly experimenting in order to develop the best marketing for the best management system. These 4 core concepts lead to the New Culture Technology (NCT).

One keyword : INTERACTIVE. SM Entertainment has the desire to communicate and interact with others. In order to do so, 5 projects have been unveiled.

STATION is a new concept of Digital Music Channel, which plans to release one new digital single every week for a year. Starting with TAEYEON single « RAIN« .

Each digital single to be released will become one « station ».

The 2nd project. SM Entertainment desire is to « expand your musical pleasure to the next level by the transformation from “performance to watch and listen” to “performance to enjoy together”.”

By working with internationaly renowed EDM artists, SME wants to create a hub in the line of Amsterdam or Miami scene. Hence, create a DJ agency putting in light « identities » based in Asia. They intend to first work with Skrillex. I must say, I am a bit desapointed with this choice since Skrillex has been working for a while with YG Entertainment artists such as G-Dragon or CL (they are pratically BFF) and recently he collaborated with 4Minute on their comeback song « Hate ». I don’t have high expectations anymore regarding this new collaboration. I’m not even thrilled by it, I am angry because it is an all warmed over project.

Finally, the main purpose of ScreaM Records is to be able in time to host a huge EDM Festival with the hopes to make Seoul a hub too.

So far, it has been one of the most challenging and ambitious project. Vyrl is the closest to Digital Playground, opened 24/7. With the creation of various apps such as Everysing, Everyshot, and Vyrl, SM Entertainment wants to extend its power on SNS in order to communicate with users all around the world who share common interests. To do so, they will provide translations for as many as 50 different languages. Which is a great step forward considering the fact that not too many contents are automatically subtitled in English these days. It will definitely improve and facilitate K-pop experience.

With Everysing, you’ll be able to sing along instrumentals and record yourself, and also record duets with your favorite SME artists. They are totally redefining the experience of karaoke which will look dull beside Everysing.

Then, with Everyshot, you’ll be able to shoot your own music video for free or take part in your favorite MV and then share them with your contacts.

This app is for all aspiring producers, which conveys SM’s producing system in one mobile platform. You become a new producer of SM Entertainment and experience trainee lifestyle by being in chagre of pre-debut teams « SM Rookies » or your own. The tricky part of this app, is not only it’s an attempt in managing your future idols but it is also kind of a trial for each subscribers. As your performances will be evaluated, rewards will be given. Like any regular apps, once you reach a level you get rewards.

But in this case, you may win the « Best Producer of the Month » what would look like an achievement in the progress of your session would represent means for SM Entertainment team to discover new talents among its own fandom and reveal potential Producers or Managers. So not only you would win the « Best Producer of the Month » but you might be offered internships within the label for example. The vicious part is by collecting all your info, Vyrl works as an incubator to seek for new managers and workforce. You basically put your future at stake. This app at first sight inocent can actually decide your future.

The MCN (Multi Channel network) business will get involved all artists from SM Entertainment. They will indeed hold the reins of the creation of numerous contents. Hosted by celebrities, they will provide video contents about Fashion, Work-out, Make-up tutorials and more. These contents will be available everywhere at anytime. Defined as the celebrity driven apps and contents mobile-friendly, they’ll be able to break the language barrier.

NCT has been introduced through 3 different videos, The Origin, Synchronization Of Dreams and 7th Sense.

My first reaction when seeing all these boys coming in the conference room was :« No, too many… It’s not a band it’s an army… Come on we are done with bands counting too many members… Please how I am going to remember all their names… »

Honestly, even after watching the promoreel, I wasn’t certain that this new band where 5 members had been introduced (Thanks God) would really stand out. It has the codes, dance performance, martial arts, secret identities, use of trap music indiscriminately… To me it just looked like another well trained boy group. Plus, in my opinion the video introduction looked more like a commercial overall.

Lee Soo Man pressed on 2 keywords : « Openness » and « Expandability« . This is when everything I believed in went crazy and I finally got scared of what SM Entertainment was planning for K-pop expansion to the world.

NCT stands for Neo Culture Technology. The idea is to launch individual teams based in major cities all around the world. NCT will have no restriction for new addition of members and the 1st unit will debut in Spring.

Various collaboration units between teams within the band will occur. One song will be released in different languages in their respective territories along with localized music and contents to target local markets where the bands are based.

The aim is to achieve true definition of Hallyu localization by undergoing through the 3 stages of Hallyu. From the exportation of cultural products of Hallyu to the expansion of the market through cooperating with local companies and artists. So by the end of 2016, SM Entertainment can establish joint ventures with local businesses and transfer SM’s culture technology to local markets. NCT would then be able to spread out numerously until infinity.

Don’t you think that it’s a bit disturbing? Is it crazy genius or just crazy? Do you watch the series LIMITLESS? After hearing NCT countless times I ended up comparing it to the NZT. Drug that the main caracter takes and which causes him to have access to every neuron in his brain.

The relation? NCT just sounds like a plague. We are witnessing the start of the spread of the contagion caused by NCT. This very ambitious project when compiled with all others ends up in building a machinery in order to achieve « world domination » in my opinion. To do so, SM Entertainment is about to release in the air a virus called NCT, not airborne but webborne. By releasing it in small amount in major cities in the world, NCT will spread just like a pandemic immersing itself step by step locally. From what Lee Soo Man declared, SM Entertainment is ready to release the pandemic outbreak starting in Seoul in Spring until global contamination. So you better watch out you all as the K-pop plague is coming and it might be closer to you than you expect!

I highly recommend to watch the video conference as it’s essential for anyone interested in the Hallyu wave to understand how the market is about to mutate in coming years.